Mention the word Badminton in non-horsey circles and most people will think of the sport involving racquets and a shuttlecock. For the rest of us horsey folks however, the word is synonymous with the pinnacle of eventing.

Badminton Horse Trials has a history and status all of its own. First held in 1949 as a way to allow British riders to train for international events, it became the world’s first annual three-day event and hosted the first European Championships. And with it’s now 5 star status, Badminton is officially more difficult than the Olympics. Competitors are drawn from across the globe, with impressive crowds of spectators in their thousands to match.

So when local rider Sophie Bultitude and her beautiful bay gelding ‘Juno’ qualified for the Mitsubish Motors Cup Grassroots BE90 Championships, it was a seriously impressive achievement. All the more so considering the pair have only been eventing since the 2018 season. And because the equestrian community up here in the North East is pretty tight (we all seem to know each other one way or another 😉), it seemed as if we were all invested in Sophie and Juno’s journey in some way, not least because Sophie kept everyone updated with her experiences via her fab blogging. Anticipation was high and everyone was willing the pair to do well. After some very skilful riding from Sophie to pilot an ‘explosive’ Juno round the dressage, the pair went double clear for a top 20 placing out of more than 100 competitors. An incredible result. And I kept thinking to myself, how must it feel to have went clear round Badminton? So I invited Sophie for a chat to find out! 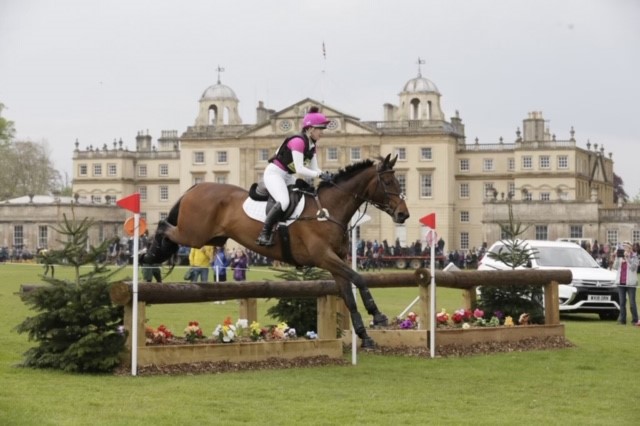 How’s that for a backdrop? Flying over the fence in front of the iconic Badminton House

My first question to Sophie when she arrives is how does it feel to be able to say you have been double clear round Badminton? She pauses before she answers, as if it is still sinking in. ‘Unexpected’, she replies. Not in the sense that it was unexpected that Juno could do it. She knew he could. But it’s Badminton we are talking about and who actually expects to go double clear? She tells me how it was a once in a lifetime experience (though I have a feeling it might not be!😉) and how she cried going through the finish line. The tears came not only because they went clear, but because her support team were all there at the finish waiting for her. Her mum and dad, brother, coach and friends all cheering her on. As Sophie explains, and as all of us know, it’s a team effort – it was as much their accomplishment as it was hers. Indeed her team consists of her mum (chief trucker who drove 13 hours over two days just to get down there!), her Dad, whom she says now has a much better understanding of the work involved in horse shows 😉, her brother, who Sophie tells me has a very special bond with Juno, coach Sally McCarthy, sponsors LP Equine Chiropractic, RG Equestrian, and of course, her Aberdeen Riding Club family. She credits all of them with playing a significant role in supporting her and helping her achieve her dreams.

But what of the horse that’s made all of this happen? Sophie recounts the fabulous story of how Juno came to be in her life. She and her mum, along with her coach Sally, were at the horse sales in Cavan, Ireland. They originally bid on a different horse, but missed out. Meanwhile they had seen Juno warm up but had to leave to catch their flight before the auction began. Sophie’s mum asked someone else to bid for Juno on their behalf. A miscommunication however meant he was bought by someone else! Thankfully the (very) new owner was willing to concede to parting with Juno. In fact it was all done in such haste that her mum was reading out her bank details as the plane was taking off and the flight attendant telling her to put her phone away! Bought, quite literally, on a wing and a prayer, Sophie describes Juno as her horse of a lifetime. Thank goodness her mum managed to make that call.

When Juno first arrived home, Sophie tells me how she couldn’t even remember what he looked like! But he had nice movement, good breeding and crucially, a lovely nature (she describes him as ‘a big dog’😉) He wouldn’t trot though – coming from a showjumping background, it was walk or canter 😂 But she persevered. Indeed when I ask her what the key to their successful partnership is, that’s the answer she gives; perseverance. Chipping away at it and not expecting everything to be perfect all at once (a lesson for all of us horsey folks who all seem to be mad perfectionists! 😉) She explains that often it’s when you least expect it that everything clicks. And how you need to have confidence and trust in your horse. You need to know they can do it. The work needs to be done at home. Sophie and I happen to be at the same yard, and whenever I see her riding, she is in the zone. Often with her headphones in, she is focused, determined and hard working. And it’s paid off! 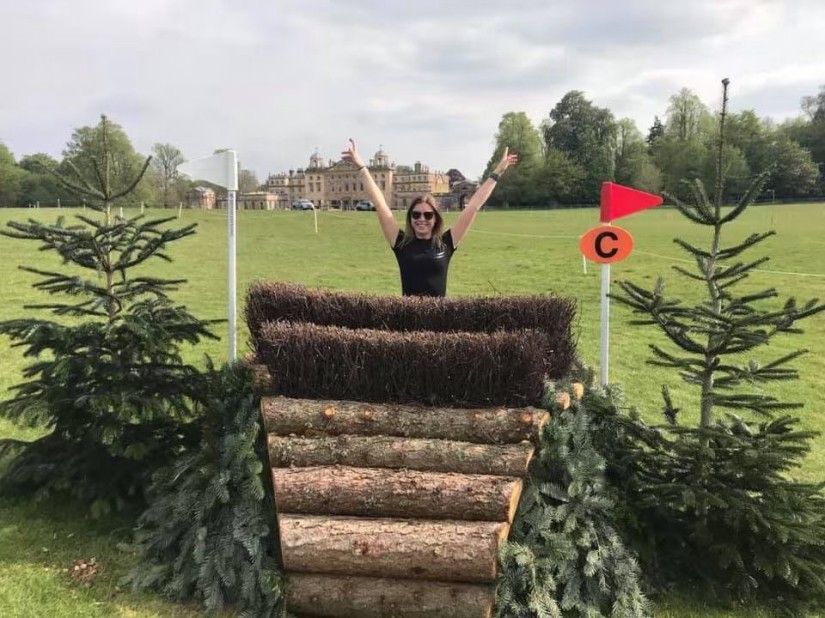 I ask Sophie how it felt to walk such a famous course and whether there were any fences in particular that gave her some heart in your mouth moments?  She tells me it was bigger to walk than ride and how she was glad it was a 90 because while it was big and technical, it was manageable for the pair who have now moved up to Novice. She explains how there was so much thought put into the course, that the smaller jumps were inspired by the 5* ones, giving it true Badminton gravitas. One particular jump was causing issues. A box which was flagged more like a corner caused some confusion. Because Sophie was on later, she made sure to watch some of the lines taken by other riders, but was careful not to over-analyse at the same time. Something she says she has had to work on and has got better at recently. When the pair were in the start box, the poor rider before them had been taken off with in the wrong direction, so it was all a bit of a hectic beginning. No matter for Juno though who Sophie tells me was so good waiting his turn. Once out on the course, he knew his job and breezed round, giving Sophie the most incredible feeling. She recalls how good he was at the more difficult questions, including the skinnies, making it all feel easy and what a thrill it was to jump through the iconic Badminton lake. Indeed her Dad even heard the commentator say how easy the pair were making it look! Sophie starts laughing as she tells me she really hoped Juno wouldn’t lock on to some of the bigger fences because he definitely would have given them a go! In fact he jumped everything so well that she had been worried they might be too fast. Consequently, she didn’t chase the time too hard, still laughing as she tells me how she looks like she is out for a hack in some of her videos 😉 Her main priority was to enjoy the experience and focus on the moment, telling herself ‘this is Badminton – let’s do this!’ 💪

When I ask Sophie what her biggest challenge was, she tells me it was the dressage phase. An extremely hot Juno had ‘exploded’ in the dressage warmup and Sophie had worried they might part ways! She describes it as their ‘hairiest moment’! The atmosphere was like no other the pair has ever experienced, the only thing close being perhaps the Blair prize giving the year before where Juno had refused to go in the ring. Banners billowing, umbrellas popping up all around, kids shouting – even a baby shaking a rattle noisily! No wonder Juno’s eyes were on stalks! It’s a testimony to Sophie’s talent that she was still able to achieve such a great dressage score of 31.5.

She tells me how thankful she was to have her coach down with her too, confessing that she didn’t really know what to do on her own, so having Sally there meant her preparation was structured and effective. She credits Sally with keeping both her and Juno calm and focused, helping enormously when it came to walking the course, which she did 3 times. In the showjumping the pair went clear, despite the fact the heavens opened and the rain poured down. As Sophie explains, as soon as Juno starts jumping, he knows his job, come hell or high water (lots of water in this case!)

When I ask what the best thing about the experience was, Sophie replies animatedly ‘everything!’  The whole experience was amazing and she tells me how so much thought had been put into each element. The event was so welcoming, with beautiful stabling, a lovely stable manager and a drinks reception by the lake. Those competing at grassroots right through to 5* were treated with the same welcome and support. Nothing and no-one was considered an after-thought. Every rider who took part was awarded a rosette – an acknowledgement of just what an achievement it is for any horse and rider to take part in Badminton, at any level. Indeed as Sophie explains, it is especially hard for Scottish riders in particular to qualify, given the lack of opportunities to do so North of the border.

I conclude the conversation by asking Sophie what her aims for the future are? She replies that the dream would be to do a 2* this year, but it will depend on how many runs she is able to get at Novice. She doesn’t want to rush things, but given the whirlwind that has been their eventing journey so far, anything is possible for this talented pair!

View all posts by countrywaysblog

This site uses Akismet to reduce spam. Learn how your comment data is processed.